Early this year, Anthony Beyrouti decided he wanted to start a charity to give back to his community which he decided to do through basketball, his number one passion. He surrounded himself with people who could work together to make this a successful long term venture. We ran into a number of roadblocks early on but ultimately, we able to make it work with the help of Anthony Beyrouti, VenueKings.com, and the Onni Group. Through their generosity and dedication to the community, we were able to send our athletes to tournaments in Canada and the US. VK Basketball was approved as a not for profit in February and within that short time frame, we were able to find coaches and gym space, register for tournaments, and put all the pieces in place for what we believe was a successful first season.

Tryouts for our U13 team were quickly announced and promoted in hopes of reaching as many kids as possible in such a short time. We received calls and inquiries wondering if our program was real as we quickly tried to get our website completed and published. Registrations then started rolling in for tryouts and we were underway. Organizers waited nervously to see how many kids would show up, while coaches were excited to see who was going to come out.

At the tryouts, we had a great turnout and a lot of talented girls which did not make the decision easy on coaches! While the coaches selected the players, it was the players that made this a team. The team chemistry among the girls was instant. You would often find them together whether it was during competition, eating together or hanging out at the dorms. Generally, coaches keep an eye out for the formation of cliques or groups within a team but this was not a concern at all with these girls. They acted like one big team everywhere they went.

While I spent a week with all the girls down in Oregon for one of our tournaments, the coaches witnessed this bond first hand. They shared their team meals in the cafeteria, they were involved in team activities like movie nights, they showed their support for the U15’s, and they encouraged their teammate, Brooke as she sang in the older girls talent show (while coaches watched in anticipation having no idea what talent Brooke would choose to showcase).

Over the course of their short season, they improved their basketball IQ, developed their skills, and most importantly solidified their love of the game. VK Basketball was a brand new program this year and we appreciate the participants and their families taking a chance on us. We enjoyed a great summer with these girls! Here is a video showcasing some of their summer adventures as the first ever U13 VK Basketball team! 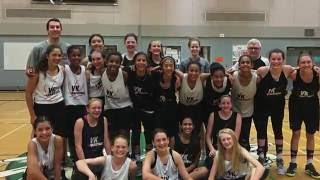